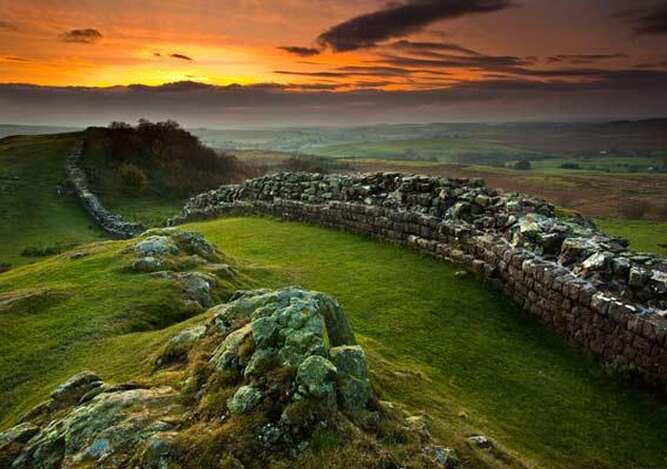 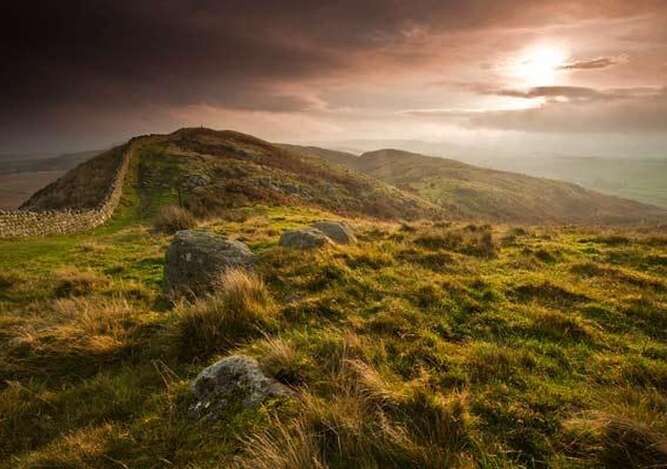 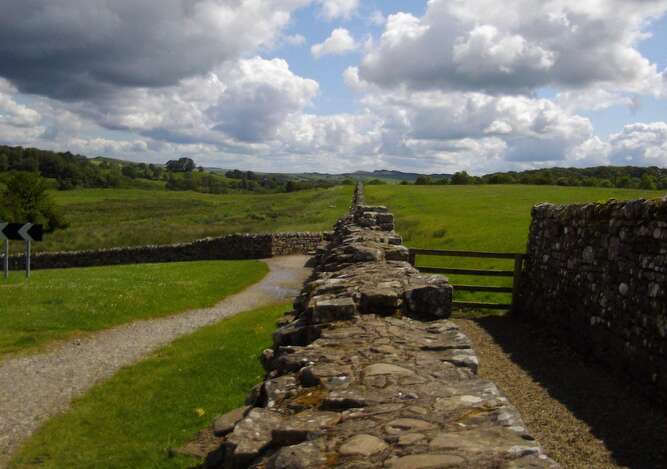 Hadrian’s Wall was built by order of the Emperor Hadrian, probably given during his visit to Britain in AD 122. Over the next six years professional soldiers, legionaries, built a wall 80 Roman miles long (117km or 73 modern miles), from Wallsend-on-Tyne in the east to Bowness-on-Solway in the west. As with most building work, modifications carried on long after this.

A Roman biographer of Hadrian stated that the Wall was built “to separate the Romans from the Barbarians” (NB not the Picts and the Scots – they arrived later!) There are many theories about why the Wall was built but it is generally agreed that Hadrian wanted to mark the northern boundary of his Empire.

Expansion further north came later when from AD 140 to 163 Hadrian’s Wall was briefly replaced by the Antonine Wall (which ran between the Forth and Clyde). The frontier soon moved south again, back to Hadrian’s Wall.

Originally, work started in the east on a stone wall, some 5 metres (15 feet) high, perhaps with a parapet. This ran as far as the River Irthing near Gilsland. Further west, the Wall was built of turf at first. Later this stretch too was built in stone. The Wall was a sophisticated piece of engineering. Every Roman mile there was a milecastle guarded by at least eight men. Between milecastles were two equidistant turrets where sentries kept watch – thus a close check could be made on the movement of goods, people and animals crossing the frontier (Holmhead is in fact built directly over the foundations of Turret 46a). During building, control was strengthened by the construction of large forts along the Wall. These and other supply forts to the south housed auxiliary soldiers, many from Belgium, Germany and former Yugoslavia. The forts also served as crossing points of the Wall. Around them grew civilian settlements. To the north of the Wall was a deep defensive ditch and to the south another ditch, the Vallum, flanked by mounds of earth.

The Vallum, with crossing places at forts, was the Roman equivalent of the barbed-wire fence controlling civilian movement into modern military sites. West of Bowness a chain of fortlets and towers ran down the Cumbrian coast to complete the impressive “Edge of Empire”. By the early 400s, the Empire was in decline and Britain became cut off from Rome. Frontier defences were neglected and as pay ceased to arrive, soldiers drifted away. Settlement patterns changed. Border skirmishes continued, the Wall’s stones reappeared in local farm houses, field walls and even churches. It was only relatively recently that interest in the Wall as an archaeological monument, and as a place to visit, grew. The Hadrian’s Wall and forts we see today are all the more precious for being the last remains of such an incredible Roman structure.